List of All detergent powder washing powder names in India

List of all the detergent washing powder names in India 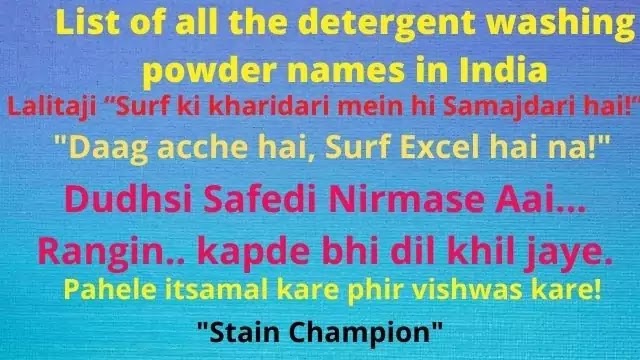 India is largely populated with many entrepreneurs in their areas. Those who produce laundry detergents locally, but are not branded properly, whatever may be the reasons. Below is a list of branded washing powders with their tagline used in branding the product.

It is believed to be the oldest detergent powder washing powder in India. I still remember in those days there was no tetra packing. It used to come in a paper cartoon as shown below.

Later it changed its ingredients by adding fragrance by essential oils and the packaging became a little floral. Then the changes made to attach tough odors, Surf sparkling ocean.

There advertisement says let children play and get dirt on their clothes we will take of their stains on clothes. Then they made advancements in the detergent and came with surf excel.

This washing powder was very famous for many years and ruled the Indian market in the initial days.

Nirma washing powder is a brand that came little after "surf". This brand is also very popular and branding was done in a very attractive manner. The dancing girl made a mark for Nirma.

Founded in 1969 by Karsanbhai Patel.

If I am not mistaken, Fena is another brand that has emerged in the laundry detergent washing powder sector. But compared to the first two brands, this was in the light for a little less time.

Those were the days when cricket was played internationally and one day cricket was gaining popularity.
Tagline : "KARO Champions Waali Dhulai"

This detergent was also very popular, both in the washing powder and detergent bar.

The greenish yellowish lemon slice indicates the cleaning benefits of the detergent and the wheel indicates the speed with which the clothes are washed clean and flower depicts the presence of fragrance in the detergent. It was launched in 1984 to counter Nirma.

Ghadi detergent did it’s mark but in a different class of consumers. Even super star Amitabh Bacchan has promoted this product on television advertisement.

Rin washing powder also made it’s mark in the market. Being only three letter word, it is very easy to remember.

Ariel is also a popular brand, they also do advertisements on the television and media regularly. . Introduced in 1991, it brought compact technology to the Indian market. Product range: Ariel OxyBlue, Ariel OxyBlue Ultramatic, Ariel Front O Mat, Ariel 2in1.

This picture shows that even the washed cloth can be washed again to look brighter. This image is a very popular image that gives recall value for the product.

This detergent is marketed by Hindi film star “Maduri Dixit” on television media. It has also made its mark in the detergent industry.

Advertisement: 1. "For Less Lint and Younger Clothes" 2. "Love your Clothes"

It is a product of Jyothy Laboratories. Henko Stain Care with Oxygen power is made with superior technology which makes the powder superfine so that it dissolves instantly and removes toughest of stains.

Other detergents available in the Indian Markets are

There are many more local unbranded detergent powder washing powders in the local Indian market, but knowing this is also adding to the list of detergents.

Navigation-Menus (Do Not Edit Here!)

Prashant
Always believe in your self instincts. Keep reading and putting value to your life. Life is too short for everything. Find the field you are interested in and grow. Getting involved in everything will never take you to any desired destination. A learned person is always humble to society. Remember the slogan taught to me in school " It is nice to be important, but it is more important to be nice".